Sal worked at the post office the other day.  As she was coming home, she saw a sea lion heading towards her accompanied by a flock of gulls trying to snatch bits of lion-lunch.  She stopped the boat and the HUGE sea lion swam slowly right alongside her.  She could have touched it.  But, the best part?  Just as she was enjoying the moment, two huge humpbacks surfaced on the other side of her 11′ Whaler (only about fifty feet away) and made their presence known with a blast of fish-breath and mist.  “Cool!”

The creek water that won’t flow downhill has presented again for the umpteenth time.  It’s crazy-making.  This time, the big guns are being brought to the equation.  I am going up with the chainsaw.  This past couple of months saw some short-lived flash flooding type stream behaviour and lots of debris is moved around when that happens.  Sal has tried to clear the small stuff away from the pick-up but the water pressure just isn’t getting up there.  So, hiking and climbing up and down the length of the jumble-in-the-ravine is the next most logical tactic.  “Free the pipe”.  It may be squished somewhere and maybe needs freeing.  Fingers crossed. 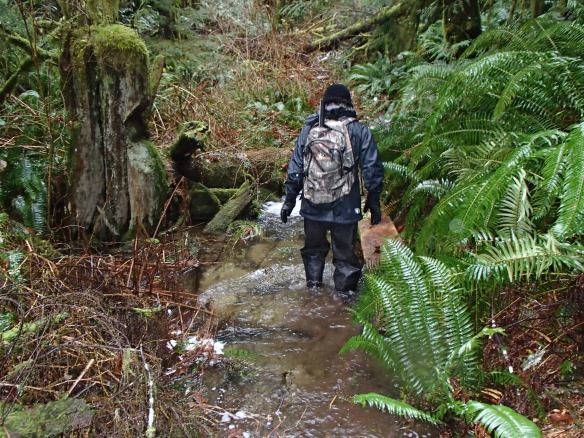 Follow-up: we spent three hours yesterday doing all that.  Nothing.  NO water.  Both of us exhausted and sweating from wrestling through the underbrush and me doing the odd bit of chainsawing.  Very discouraging.  My friend, water system sharer and designing partner and neighbour stayed warm and comfortable in his cabin waiting and hoping for our success but thinking all the while that he knew better. “I think it is just bleeding the system, really.  Gotta bleed it right.”

We dutifully reported in that we had been – yet again – unsuccessful in getting water to flow downhill.  Plus we bled everything all over the place.  Blood and water.

After we got home chagrined, soaked and humbled by the sophistry of gravity, we had a shower and settled back into the sloth of a late afternoon and a roaring fire. Sal made a great curry for dinner.

“Hey, Dave!  J and I went over to the water system after you went home and really bled it.  Like, for an hour.  Nothing.  So, I cracked a little tap open a bit and left it overnight.  That did the trick!  Water is a-gushing!”

I love my neighbour.

This month has been travel hell.  Seems people and things need more than the usual amount of attention and none of that could be done several demands at a time.  Each event needs a separate day and trip.  We will ‘go in’ to the other island at least ten times this month.  Maybe more.  Some of them at night.  That’s 3 hours of travel each time and at least 30 hours of driving this month (mid Oct to mid Nov).  Does that make any sense?  Seriously?  Feral seniors living on a remote island COMMUTING at least thirty hours!!  I just refilled my gas tank and some boat-totes ($160) and have not gotten off the neighbouring island!  Does that sound sane to you?

It sounds insane to me.

Speaking of insane……Trump. Sanders. Conway.  All of them on point with the bald-faced lie of Acosta ‘putting his hands on that young intern.’  Man, oh man.  A president who is a pathological, serial liar and his friends deny what was captured live on camera and then, submit a doctored version of the same film to persuade for the lie.  This is Orwell over-the-top.  This is 5-year-old type behaviour.

In that sense, TRUMP is right.  It’s all fake news.  Nothing is real.

Speaking of hopeless…..Keystone XL is hung up.  Trans Mountain is hung up, (the latter maybe hung up to dry).  AND the price of crude is dropping!  I met Rachel Notley years ago and took an instant dislike.  She too, like Trump and Ford, is rude, arrogant and a self-centred bully.  Nasty piece of work.  I have no time for her.  But, but, but….can you imagine being the NDP premier of the Oil, Cows and Guns province at a time like this?  She’s got the worst job in the world.

Well, Teresa May doesn’t have it easy either and Angela has had enough.  And Trudeau really should hide out more.  Mr. Selfie has gone more low-profile.  The genius of John Horgan?  Mostly invisible.  It is a tough time to be a politician right now.  I suspect that even Trump is unraveling even faster from whatever made up universe he lives in.  I think I see the signs….but then again, he has been mad as a MAGA hatter from day one so it could also just be more of the same.  Hard to tell when they are THAT evil-crazy.

Now to something ‘interactive’……a question…..waddya think?  Winter is coming on.  We hate February here.  It’s bleak, wet and dismal.  Sometimes even cold.  It is NOT unendurable but it is the least best part of being here (altho the extra quiet is nice).  We usually go away, tho.  One month.  Maybe two.  Six weeks is good.  And we have a place to go to.  Arizona.

But, I dunno……?  Arizona?  Yes, it is sunny.  Yes, it is cheap.  And it is likely safe because 90% of Arizonians can’t even spell ‘politics’.  And I am white.  I doubt anyone there reads.  They follow professional sports instead.  The Kardashians.  But it feels wrong.  It just feels wrong to even go NEAR the US/Mexico border surrounded by Republicans at a time like this.  Does anyone know what I am talking about?  I mean….NASCAR-fan, Bubba flipping burgers may be as stupid as the hat he is wearing but he’s no real threat to me.  The sun is shining.  We have a roof over our heads.  Avocados are cheap.  Food is very cheap.  Wine is also very inexpensive….what is NOT to like?  But, still…….it feels wrong…