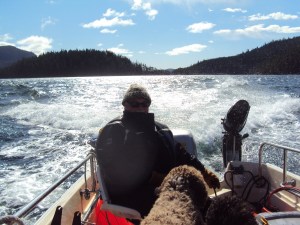 OMYGAWD! We are back! It is SSSSoooooo good! It is like returning home from a winter storm to a warm fire and hot toddy. Better even because that is what we did sans the winter storm!

OK, it may have been a bit inefficient but not by much. Stopped by to see an eccentric, creative friend of mine who had fixed a complicated device for me and, of course, we then went for breakfast before resuming the trip. Non-highway time: maybe an hour and a half.

Rocketed up the highway until Courtenay where organic dogfood was purchased (60 pounds) along with some other heavy proteins for us. And proceeded north to Campbell River for a blitz of shopping at Save-On and a quick stop at the chainsaw store.

Ate a sandwich while driving. Drank tea from the thermos. Peed on side of road as necessary.

No time to lose.

Caught the 5:30 ferry out of CR and headed up island to our awaiting vessel (kindly placed there the day before by good neighbours). And then the fun began. It is dusk-y at 6:00 already.

We had taken our utility trailer this time because we had a lot of stuff to get back. There was the new TV to accompany the DVD player my daughter had given us as a gift last summer, the 11 or 12 large boxes of books that we deliver to the community library every year (culled from libraries). Luggage. Computers. Groceries. Dog food. Hardware and some building materials. We filled the car and trailer and then the boat to the brim!

Of course it was dark. Waddya thinking?

But it was not raining. It was not storming. The sea was calm and, best of all, the tide was just over halfway up the beach (that bottom half is a treacherous climb). We unloaded the truck and trailer, loaded the boat and headed over slowly. Very slowly.

Then, as the moon witnessed our work from directly overhead, we schlepped the load up the beach and on to the boat house deck. Sal took the boat around as I finished heaving stupidly heavy coolers onto the funicular and then I sent it up. An hour a half later half of everything was put away and we stopped for a bagel and some scotch. Not a bad combination.

Today we go back to the boathouse and bring up the rest. Speaking of which, we intend to throw that in, too. A rest that is.