We arrived our destination somewhere between Cha am and Hua hin late this afternoon.  Long, hot journey by hire-cab from Bangkok.

It’s a nice place, tho.  Lovely, actually.  Gated community predominantly occupied by Norwegians.  Kinda weird. The unit itself is a stand-alone ‘villa’ that is about 1500 sft, two bedrooms and two bathrooms.  All mod cons.  Very clean.  Quite new.  The real appeal is the quiet neighbourhood.  This little enclave of about 50 units (more than half seem empty) is set back from the second-main road and a few kms from the village centre.  Nice grounds.  Well maintained.  Bananas on the trees.  Strong sense of ‘privacy’ pervades probably because the residents are gay with Thai partners or not-gay with Thai partners. 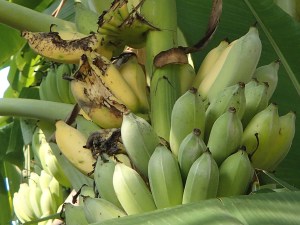 Eric, the owner’s rep, greeted us.  He’s French (ex-military).  Go figure.  But he got us ‘oriented’.  ‘”Parlez moi lentement, s’il vous plait, perseque je suis Anglais”.  He and his Thai wife (Mod) arranged a scooter for us.  We are feeling better and having wheels will make me feel more manly.  Even scooter wheels.  It’s a man-thing.  No apologies for that.

The Thai-European partnership-thing is a common phenomenon here and in most other ‘tourist’ areas.  Eric left his French wife a few years ago for this one in Thailand.  Says he is happier.  Thai women are beautiful and presumably as pleasant at home as they are in public but I am not so sure love has much to do with it.  These relationships seem to have an element of ‘strategic mutual convenience’ to them.

Our community is gated. We have ‘guards’.  Eric says it is all unnecessary.  No one steals much unless something is brand new.  “Don ranta new hammit (helmet), zey will take it!  Gez zee old hammit.  No one likes zee old hammits!”

So, I can see us now.  Two old geezers in old hammits tooling around Hua Hin having a great time.  C’mon…?  Picture that in your mind and try NOT to smile.  I’m smiling and I’m the old geezer!

Sal’s hammit turned out to be brand new and pink!  She thinks it suits her perfectly.

Part two of first night:  got scooter (Honda 125).  Went out.  Like old geezers, we left at 5:00 pm NOT thinking about nightfall.  Got lost.  Drove around. Scared poor Sal half to death simply zooming and taking turns in a swarm of scooters going willy-nilly in every which way.  We got all the way to Nilly and decided to turn back.  We had gone looking for the local grocery store and just missed a few turns.  But, on the way back, we found it.

MAKRO is huge.  Bigger than the typical Superstore.  Massive section dedicated to live and frozen fish.  Nothing like shopping for live catfish swimming sluggishly on display.  Almost as large a fresh meat-lying-in-heaps-on-tables section, too.  Interesting.  Kind of a cross between a Costco (large portions), a Superstore (smidge unkempt) and a warehouse (dark sections in the back with larger quantities of various goods on pallets and wrapped in plastic).

Bought enough for breakfast and what we could carry and then we blasted back into the dark night NOT quite remembering where, in fact, we now lived.  But…what the hell….off we went….found another Norwegian gated community with a similar name….and then went further North to that twin’s community and got home safe and sound. 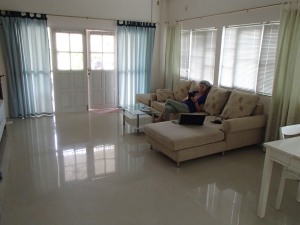 “Well, we got beer and cornflakes, coffee and a pineapple.  Ya wanna rustle up some pineapple for dinner?”

“Rather get back on the scooter and try and find a restaurant.”

Jumped back on the scooter and headed to the highway junction.  There on the corner was an open-air restaurant with a lot of old white people in it (Norwegians) and so we stopped there.  Dinner was cheap and good.  When it was time to go, it was easier to drive the wrong way back down the divided road than go a few miles to the u-turn to reverse direction.  Sal climbed on the back and closed her eyes tight as we wended our way back against the flow.  It was only a few hundred meters.  We made it.  Sal didn’t say a word the whole time (didn’t breathe or scream either).

Epilogue: all the local ex-pats fall into one of two camps: “For God’s sake, don’t ride a scooter in Hua Hin.  Certain death.”  Or: “Yo! Dude.  Been driving here for seven years.  No problem.  Just be very careful and DO NOT DRIVE AT NIGHT!”

Of course, we drove at night.  Had to.  But they do have a point.  We are going to limit the nocturnal missions.

Headed out today to ‘stock up’ and hit the super-Makro with a vengeance.  Bought $200 worth of stuff.  Should last our stay. Think: six brown paper grocery bags full plus bottled water.  Called a cab. Sal rode in the taxi and I followed on the scooter.  The guy had a lead foot.  I was hitting 100Kms on the highway and weaving around traffic (well, I weaved around a few cars and bikes but it felt like traffic).  Scooter and pulse maxed right out.   Clearly the taxi is the way to go.  Next time (if there is a need) we’ll send Sal in the cab and I’ll take the side alleys and meet up later rather than try to keep up on the Thaiway from Hell.

Is it good?  Yeah.  It’s good.  Kinda Asian-cum-Mexican standards….chickens and dogs everywhere, shanties and fancy hotels side by each, modern highways that lead to ditch filled dirt side roads…the whole, basic, standard third-world-thing but maybe a notch or two up.  Food’s good. People are nice.  No sense of danger except when two-up on a dinko scooter going hell-bent and surrounded by a gazillion others doing the same.  No guns.  No thugs.  No heavy police presence.  All very laid back.  Not expensive but NOT cheap either.  I just booked a round at the local golf and country club, for instance, $100.00.  Dinner out for the two of us is usually around $30.00. Some things in the store are way more expensive (wine) and others are way, way cheaper (meat, chicken, rice, veggies).  Ex-pats know the angles (or their partners do) and we are ‘living’ at a higher cost than they do but at a lesser cost than the resort dwellers.  My guess is that a savvy couple with good accommodation and a scooter could do very well on $2000 a month here.  Jus’ sayin’….

8 thoughts on “Things are looking up”