I have never liked Calgary.  And I may still not (in the long run).  But last week I saw a side to it that I have never seen before and it was beautiful.  Very appealing.

Aside: whenever I am insulting an urban environment, I tend to towards dissing Toronto first.  It’s just so awful that vitriol virtually gushes from my mouth.  Too easily.  I hate Toronto and, to be fair, most of Ontario.  It’s NOT the people (altho....), it’s the humidity, the extreme temps, the traffic/commute, the Ford family and, not least on my list of worst critiques, it is the dog that wags the tail of the rest of Canada.  And I hate that.

I tend to dislike things almost in direct proportion to the amount of power they wield.  I even get annoyed at being directed by BC Ferry workers…….you can imagine how hard it is for me to cope with an airport security idiot.  Or Toronto police.  And, because Bay Street has so much power and influence in this country, I tend to hate them, too.

Part of it, of course, is just GOMs.  Grouchiness.  Grouchy is now how people who love me describe me to others……amongst other things….and you can imagine what the others then say…

There is no question I am now a bona fide nut-bar: wanna see Dave apoplectic?  Put him on a plane that goes to Toronto.  KABLOOOOOOIE!!!!  That is all it takes.  And, to be fair, Calgary has set me off more than once, too.  Calgary airport is tied with countless others as to the second worst airport I have ever experienced.

“Why Calgary?”  Because part of the Calgary airport (YYC) has been ‘ceded’ to the Americans and the Marines patrolling “US soil’ at YYC (and in CANADA) do not hesitate to tell you that they can take you and never give you back.

My daughter and her husband just moved into their newly built new home about 30 minutes or so outside of Calgary.  They are in the country, the rolling foothills of the Rocky Mountains.  Rivers-run-through-it kinda country.  Moose have a walk-through preserve just outside their back yard.  A bear came and tossed their compost last night.  We saw deer everywhere.  It was bucolic.  And GET THIS! ….the bug count was very reasonable.  And the temperature, the air, the changing weather patterns…all good.  All VERY GOOD.

I have to ‘walk-back’ a few of the terrible things I have said about Calgary.  Apologies.

We traveled there to give them a house-warming gift-of-sorts.  She wanted a deck.  He hadn’t ever built such a thing….. and she wanted 700 square feet.  Up high, too.   So Sal and I were going there for five days to build them a 700 sf deck that resulted in an almost 10 foot-high extension of the main floor.  It’s pretty big. 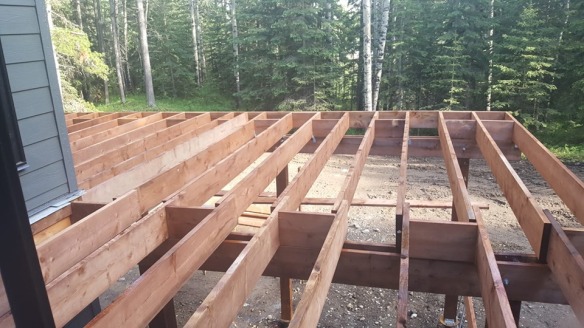 I am 71.  Sal has a cracked rib.  Husband isn’t familiar with tools.  But daughter is a smart cookie and she had pretty much arranged everything and planned the logistics.  General Contracting 101.  She did good.  He did good. We did good.  And we got it 7/8 built. The decking still has to go on and so do the railings and even a set of stairs.  But the hardest part is done.

Sal’s rib?  Let me put it this way….. she worked like an illegal fruit-picker and kept just as quiet.  Without Sal we wouldn’t have gotten it done but, with everyone doing what they did, each was essential to getting it as far as we did….7/8.  Amateur team, Pro results.

25 thoughts on “Apologies to Calgary”