Almost 18 years ago I inexplicably began collecting eclectic junk. It was eclectic and it was junk for several reasons: it was all old and second hand, it was all weird and industrial in nature and it was usually being sold as junk rather than as ‘collectibles’. I paid by the pound. 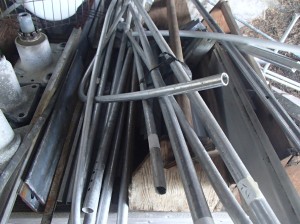 I picked up a lot of crap before Sal even noticed. It was accumulating in the garage unseen but in cardboard boxes and, by the time I had eight or so, she did, in fact, notice them.

“What the hell is all this junk doing here?”

“Well now, sweetie, I know it looks a bit odd but, you see, I am kind of dreaming of living OTG some day and, if that ever happens, I may need some of this junk. You know, OTG type raw materials?”

“Fine! Whatever! But what is that thing? And why are there three of them?”

“To be honest, I have no idea. But they were cheap and Harry at the junkyard suggested I get them while the getting was good. Clearly they are some kind of log-moving device. I think. Maybe.” 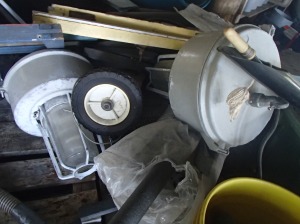 “Well, you are nuts, you know that? But, if it keeps you happy, fine. Just don’t get any more junk, OK? I can hardly move in here.”

“OK”, I lied. But, technically, I didn’t actually lie. Not technically. The next few batches of things were so large they wouldn’t fit in the garage. I bought about 16 or 18 twenty-two foot long double hot-dipped galvanized 6×6 angle iron heavy rails salvaged from a collapsed BC Hydro power transmission tower next and then 12 huge 4′ x 2′ heavy grates. I put them all on the driveway. That did not go over well.

“What the hell! Why do we have a do-it-yourself transmission tower on our driveway?” 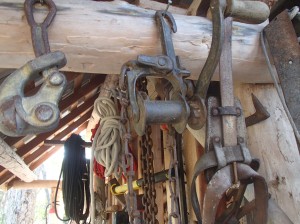 And so it went for approximately two years. More and more stuff bought for an as-yet-to-be determined project. There was occasionally a bit of tension – nothing I could not ignore. The turning point came for us (as a couple) when Sal came home from work and yelled to me from the front door, “Hey! Get your coat. Some guy is throwing out a whole bunch of what looks like winches. It is your kind of crap!” We went down the street and loaded the car with about a dozen winches, some the size of a small dog and some bigger than a large one. The guy had been a winch repairman and was getting out of the business. The car sagged from the weight. We both felt like we had scored!

I also bought some marine junk/crap. I just kinda like marine crap and so it was more of an indulgence than part of the loose and not yet conceived housing plan. But, it was marine and some of it was bronze and stainless and all of it very cool. Sal likes marine crap, too. That was a blessing.

Amongst the myriad things I got for next-to-nothing were some old ship’s lights. And, over the years, they have matured and mellowed in boxes under the house. They have not proved as useful as the huge angle iron or the massive grates. Who knew? 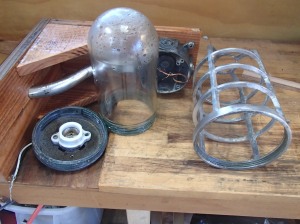 Yesterday, I decided to make another project. I rescued two of the lights from the still impressive pile of junk. I cleaned them up, attended to the wiring and chose the locations. “Hey, Sal? You still up for some wiring?”

“I am going to use some of the old lights from the junk pile.”

“OK! If it gets some of the junk from the pile, I will help. Can you use up all of it up?”

“No. This is a work-in-progress. SLOW process. You have to go with the flow, ya know?”

“Fine. But keep it up. I wanna get rid of all that junk someday. Please.” 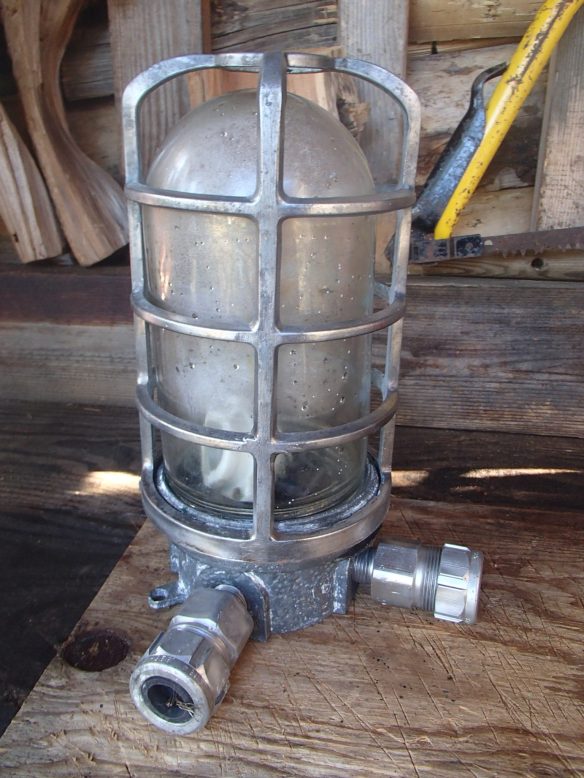 “Are you saying that I should stop looking on Craigslist for more?”

Reality check: I have used way more than 75% of what we got. If we go by weight, more like 90%. It all came in handy – still does. The downside? Every bit of it was carried in by hand and small boat. Junk collecting is a real exercise in exercise.

15 thoughts on “Packratting for posterity”