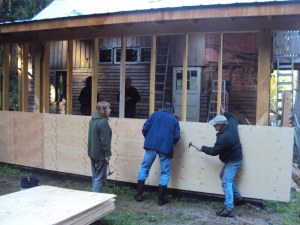 “The community got together yesterday. All four of us…..(plus twenty).”

Yesterday was a scheduled work party day and 24 people showed up! The new addition was clad in plywood and papered. Windows were cut and framed in. Debris was collected and burned. Steps were added. And the spindles were put on most of the new front deck (ran out of wood for the last 25%).

The old kitchen and gathering space was also cleaned to a level of hygiene never before experienced. I was afraid to walk in. So were all the guys. It is a good thing we now have a deck on which to stand while someone in stocking feet fetches tea and coffee.

So many people showed up that it was not a gathering; it was definitely a community. A nice one. No question.

The community association board members always give up a lot of their time and energy to make something happen.  They are really good.  Sal is one of them.  This was no exception.

Usually one of the community members also contributes a bit more, gives a bit more and/or stays longer as well.  That, too, is not unusual. There is always someone ‘stepping up’ and seeing the job done right to the very end. The board members and the ‘extra helper’ usually leave at the same time – at the end of the day.  P did it on the road. H did it on the Q-hut. B did it on the stairs.  That role changes hands depending on the project but it was L & R this time that gave a little extra to make it happen. Nice to see.

I don’t wanna do that but I like seeing it.

Our resident ‘Merican showed up, too. M is a nice guy and has been here for a few years. It was bittersweet, tho. He’s leaving. He was just starting to fit right in, if you know what I mean, and now he sold his place and is packing up. Too bad. Nice guy. I am not so sure that Canada did him right, somehow. Lotta red tape. But the local people were good. He made a lot of friends. I think we’ll see him again.

It takes awhile to get a real foot in out here and once you have been embraced, it is a hard to thing to give up. We’ve been here for just coming on seven years now and we’re just startin’ to fit in.  Big picture, anyway.  We’ve got some good friends up here already but we still need to be introduced to someone now and then.  Takes some time to get to know all of the 200 plus people spread over so many islands.

But we’re getting there.  Even get an embrace or two. ‘Course, no one wants to get overly committed or mushy in any way. Not just yet, anyway. We’ll be fully accepted and no longer newbies by about 2020 if we continue to keep our noses clean, watch our P’s and Q’s and don’t put on any fancy airs. We’re still somewhat on parole.

Sometimes I think I set us a back a few paces now and then. Hard to tell. The problem is when I employ some of the old vernacular from my business days.

Talking about land developing, “I’d have to do a proforma. But this one would be pretty unique because there aren’t gonna be too many banks interested in financing this so the equity side would have to be big. ‘Course, that means the prices are lower, too, ’cause the buyer can’t finance either. We may have to self-finance. Wow! That would mean a lot of faith, eh?


“Perform? Faith? You’re gonna perform a faith? What does that mean?”

“Well, this deal would be ‘bite-sized’ for a few sugar-daddies, I know. Not too big.  But there’d hafta be a decent upside, tho.  And that might be hard to achieve without conventional mortgages to facilitate sales. If we can get D to roll his piece in and maybe pre-sell a few units before we actually had ’em or even option the land, then it’s maybe do-able. Less risk equals less required return. It sure would help if we could get part of the soft costs done on the if-come.”

R looked at me like I was speaking Swahili.  “What?”

“You know…no risk, no glory. That kinda thing. But really, man, like what’s there to lose, eh? They’re not workin’ anyway. And it’s not like the land can get boxed up and returned to the factory! Know what I mean?”

“Not a friggin’ clue! What the hell are you talking about, Dave?”

“I am talking about maybe optioning the site, raising some dough and some work-in-kind or get some consultants working on the if-come. You know? Float a real concept. See if there is a market? Ya know?”

Incomprehension turned to resignation.  “Yeah. Well. Whatever. Sounds good. Maybe if you could write that up for me in a few simple sentences. Using English, maybe? And, like, thanks for the tea and whatever. I gotta go.”

“Write what up?! I just explained it. You want some written sentences? Like, ‘tie up land and do a little preliminary work and see if someone will back us’? ‘Cause that’s it. Just said it again.”

Speaking  over his shoulder with just a hint of sarcasm as he was leaving quickly, “Oh yeah, right. NOW I get it. Thanks. Gotta go. See ya.”

So there is still a gap, dammit. I guess I gotta lose the business accent.  It’s the Gordon Gekko in me. But, in the meantime, the community is coming together and we are starting to understand each other.