I have no idea how Sal and I are viewed by you readers.  I assume that we are generally liked (Sal, anyway) and considered somewhat sane if not a bit eccentric now and then.  Sal IS a quilter, after all.  You few-but-valued readers are basically pretty loyal so there must be some interest in what we are up to.  And I appreciate it.

But the book generated more public and general comments and not all were positive so the OTG lifestyle (as lived by us) may not be as well received by the average person.  Hard to say.  I distinctly recall my doctor’s brother’s comments, after the first few chapters:  “This guy is an idiot!”  Then, after getting half-way through the book, “Well, he is at least learning as he goes.  I don’t think of him as an idiot anymore but clearly he is lacking common sense and the skills to do what he is doing.” By three quarters through, his comment was, “Well, they are doing OK, I guess.  I won’t dis him anymore and I sure do like his wife.  Still, he has no business doing what he is doing and making her do it, too.”  At the end of the book, “I kind of like him.  A total goof but I kinda like him.  Especially her.  Yeah, I’d read another book by him if he survives.”

The point: we changed, grew, evolved and survived and thus earned his grudging respect.  And I sort of see that guy’s opinion as a reflection of our own view of it.  “We were total incompetents and were lucky not to have killed ourselves but now we are only half incompetent and can actually do a few things (not well but good enough).”

Which brings me to chore #2.  Chore #2 was painting the bottom of the boat.  Of course, painting boats has been a chore we mastered decades ago while living on board our various boats.  We can paint bottoms.  And this one is only 16 feet long.

It is NOT hard.  But, surprisingly, we managed to make it so.  The boat is – at first – on a trailer.  You cannot paint the bottom of the boat properly if it is on a trailer so it has to come off.  We are in Sal’s parent’s driveway.  ‘How to get a one-ton boat off a trailer’….hmmm…..?

I bought a couple of ‘jack-stands’ at CanTire and blocked the boat up a few inches above the trailer and half-pulled the trailer out from under.  Then I jacked and blocked it up again so that the axle would clear the first blocks and then pulled it free.  So far, so good.

But it was on kinda spindly supports………

“Ya know…?  Better to be safe than sorry.  I am gonna kick in a couple of tree rounds just in case those jack stands (rated for 6 tons each) fail.  They look a bit less stable than I would like.”

I kicked a chunk o’ tree under the transom.  The tree chunk nudged the boat.  The boat wavered a bit and then it corkscrewed off the front grid and the two jack stands and slid forward, down and to the port side and onto the sloping grassy garden.  We now had a one-ton boat on the ground all akimbo and pointing down slope.

Sal’s father said, “Well, that’s for it, then!  We’re going to need a crane truck to get that back.”

Sal said, “No way.  We have ropes, jacks and junk.  We’ll haul it back up to the driveway ourselves and then jack it up again.  David will build some proper cribs and we won’t rely on stupid jack-stands.  Now, get out of the way (Sal’s dad is 94), we have some haulin’ to do!” 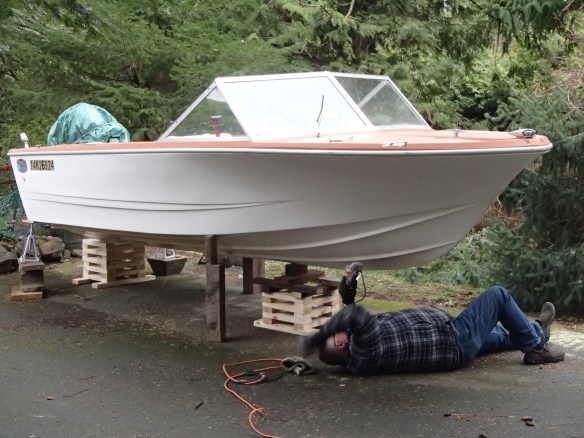 A few hours later and a lot of jacking, cribbing and pulling (with a rope to the car), we had it up and stable.  Damage?  None, except to our reputation of growing and evolving.  Plus the work-day spent making up for an error.

So, this is the lesson:  We came to this OTG lifestyle unskilled and stupid but healthy and strong.  We grew our skills with blood, sweat and tears (mostly blood) and gained a level of competence that came only with the price of time and gazillions of dollars.  In January, I turned 70.  And I am not so good anymore.  It is not skill so much that I am missing now.  It is strength and energy .  In other words, looking back on it, Sal and I peaked five years ago.

Crawling around under the boat was difficult.  Getting up off the ground was even harder.  Hauling, lifting, jacking, using muscles (before turning to the car) was also somewhat taxing.  Falling asleep at 9:00pm was incredibly easy.  Working all day on a ‘creeper’ and sanding and painting and finding myself tired after a relatively small job was embarrassing.  Maybe it was just vacation lag but I don’t think so.  I think this was lag-lag.

This gettin’ old is starting to get old.

Still, two chores down and only 18 more to come.