Yet another ‘late blog’ mea culpa….sorry….

Been busy, ya know.  A man’s work is never done (usually because he refuses to get started on it).  But I had no choice last week.  Had to haul butts and tools down to offspring’s house and pry some parts of his house loose, set them free, released them into the renta-a-bin appropriately named, ‘Bin there, dump that!’ That was good.  Got to see my grandson.  Waddacutie!!!

Couple extra days with Sal’s parents collectively 184 and still going full tilt. ‘Dad’ took early retirement at age 60 and has been collecting his pension for 34 years!  “I just passed the time collecting my pension compared to earning it!”

THAT Has to be some kind of sweet revenge!

And then we charge back home from a HUGE Costco-shop laden to the brim only to find the fabulous funicular acting up.  Well, NOT acting UP, actually.  It would go down but it would NOT go up.  So, we schlepped.  And schlepped.  And made calls to techie friends to help ferret out the gremlins in the magic motor controller box.  Got instructions.  Did stuff.  Multi-metered some other stuff.  Wiggled wires, that kind a thing.

Then went back to schlepping.

I find the motor controller and logic box unit a bit confusing. See picture. Sal, the resident electrician, is totally confounded as well.  This is a learning gap larger than the age gap between grandson and great grandparents.  But, we’ll figure it out.  It is just a matter of time.  Sal has the longevity genes…….and may need ’em. 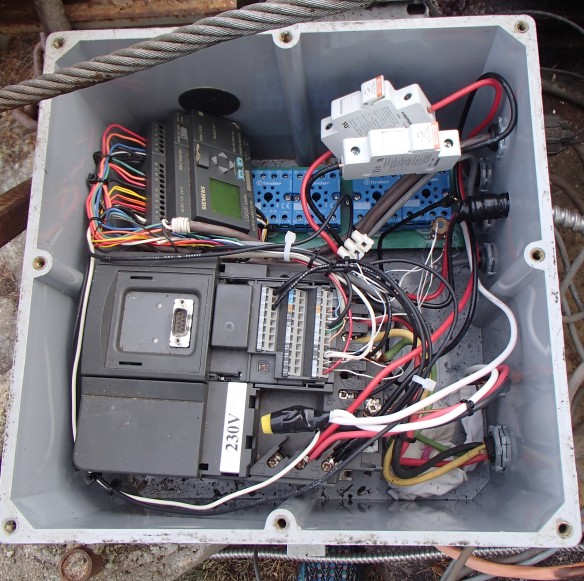 Another reminder of Alzheimer creep (not to be confused with the old guy down the hall) is made omni-obvious by silly-me volunteering for a health care clinic initiative on the neighbouring island.  I have driven more miles in the last two months than the previous year!!  We all seem to meet a lot.  And email a lot as well.  It all seems like a helluva lot of talking to me.  So, someone suggested Skyping.

Sounds good.  But I do not know how to Skype and neither do all the other committee members (except the one who suggested it).  They are as afflicted with AC as I am.  We are a committee of Luddites.  Average age..?  65?  We can email.  We can phone.  We can drive.  But Skyping?  Seems a bit much, ya know?

And the ‘being hip’ gap is widening.  I can ‘touch’ my credit card to the machine in some places.  But not in others so that creates the embarrassing spectacle of me waving my credit card around in the air with a look of expectancy on my face only to be looked at pathetically by the pimply faced youth who says, “Like, no swiping here, man!  Gotta, like, insert it, ya know?”

Kid slowly points to a huge sign saying, “THIS TERMINAL DOES NOT ACCEPT SWIPE!”