I haven’t played at golf in 15 years.  I have never really played golf but there was a time when I played AT it.  I put it that way because, in my opinion, golf is the best game there is because, even as you get better, you can never win.

Oh, you can win against your other buddies who are generally as bad (or worse – that’s why you play with them) but you can never beat the course.  The course is always better than you are and, even if you are named Tiger, and you do well enough to beat most courses, there is always a hole or two that beats you and, sometimes, beats you badly.  For Tiger, a par is a missed opportunity and a bogey (one extra swing) is embarrassing.  A double, triple bogey or ‘blow up’ is soul-crushing.

For me, at my best, bogey golf was to aspire to and a par was a celebration.  The odd birdie (one swing less than was expected for the hole) was the stuff of talk-over-beers and one time I got an eagle and that one-time event has gone down in golfing history.

Seems wherever I go, that story is told.

I mention all this because my recent foray into community volunteerism has resulted in an invitation to join two other hackers onto the local course to whiff and slash until we can drink beer, eat nachos and I can tell my eagle story.  I can hardly wait.

Sal said, “You have your clubs, you know?”

“I didn’t even know I had my clubs.  Shoes, schmooes….I’ll wear gumboots.”

Sal brought me my clubs.  I took my five iron out and walked to an open part of the deck.  I wiggled my hips like they do, took a grip and slowly moved into my backswing.  THAT was a shock.  Seems the backswing is a helluva lot shorter than I remember it.  But…in for a penny…eh?

I paused at the top of the backswing (like they do) and found that the pause was held at about two thirds of the way up.  Oh, well.  And then I released, sweeping the club so that there was a slight ‘click’ as it clipped the surface of the deck.  Oh! The sweet sound of the ‘click’.  Sadly the click was the highlight.  The follow through was as abbreviated as the back swing.  My golf swing is half what it was and – I am guessing – half as capable.  That translates poorly when used to tally swings-taken.  Instead of reaching a 400 yard hole in two or three (or close), I will be lucky to make it in four and more likely to take five.  Can I average one hundred yards a swing?  And that is NOT counting the inevitable and yet always-surprising errant flight of the ball off in the wrong direction (add two more strokes as one wanders all over the damn place)

Of course, I know me.  I’ll actually take fewer strokes than nine-times-seven (63) for the front nine because, by the third hole, I’ll be swinging for the fences, coming out of my shoes and the ambulance crew will be picking me up at the fourth tee.

I just read the other day of an 86 year old who regularly shoots par (72) at his local course and that very day had shot an astounding 68.  Almost 20 strokes less than his age!  Golfers aspire to ‘shoot their age’.  Going under that metric is astounding.

“Look what I found!” 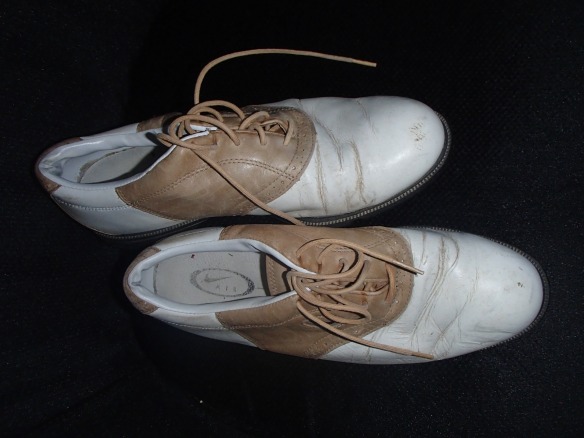 “My shoes!  Where the hell did you find them?”

“That’s the sad part, sweetie.  I’m afraid to let you go out with those guys. They were in your golf bag.  What kind of doofus doesn’t look in his golf bag?”

“You are right.  I may not be able to do this without you.  Let me show you how to caddy……”