After relocating up to Cha am, we were without wheels and, for a day or two wandering the local streets, which was fine.  Shanks mare was good enough.  But, well, I need wheels.  It’s a primal thing.  It could be my immense girth.  It could be sheer laziness.  But whatever it is, it is a real feeling and it is exasperated greatly by daytime temperatures in the 90’s.  I do not want to walk too far in that kind of heat and we are located rather far from most places of interest.  So, I rented another scooter.

After getting it, Sal and I went for a longer exploration of Cha am.  It is a beach town and, like most such towns, is stretched along the beach (duh).  Cha am beach (south side) is pretty long (maybe twenty kms, maybe longer).  It stretches at least as far as Hua Hin. But the beach road is piecemeal and our piece is only about four or so kms long with a man-made harbour cutting access to the north beach.  The north beach looks pretty nice.  The south beach has the ubiquitous string of hotels along it. 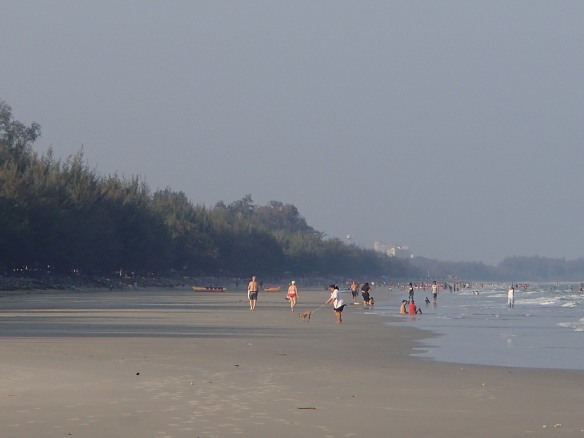 Basically, the beach is a beach and the part we are on is very much the public, older, more local beach for the hoi poloi.   The rich people have different sections of beach further south or further north.  We have the sea food stalls, cheap restaurants and 7-11’s.  And, for the whole four or so kms, our beach is covered in large, virtually permanent beach umbrellas.  It’s interesting but not exceptionally pretty. 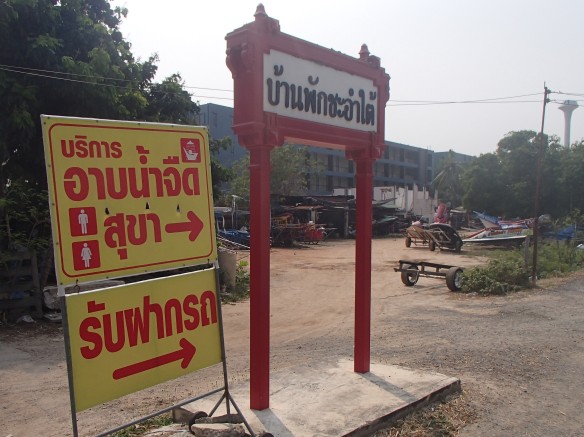 The red sign is the street sign (we think). The yellow sign directs day-trippers to a toilet and shower establishment. We are having a lot of fun getting around with no map and no phone. We use our laptops to Google a route and then hope for the best.

So, when we got mobile, we left our local stomping grounds and went north.  We hit the fishing harbour and had a good look but, for some reason, looking from the other side appealed to Sally more and so we headed inland in an effort to find a fishing harbour crossing.  And we did. 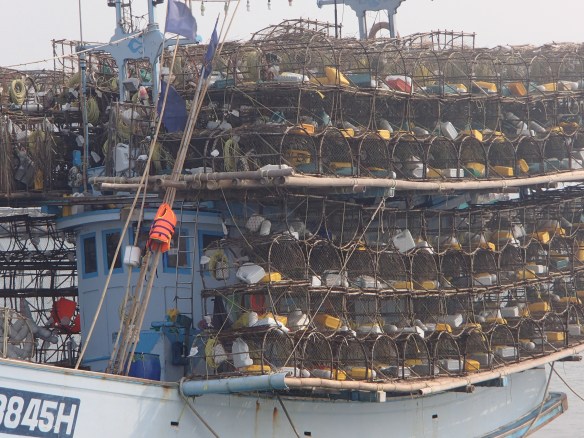 Imagine a foot suspension bridge about 200 feet long and four feet wide.  It is sturdier than a rope suspension bridge because there is some steel structure to it but the ‘sidewalk’ is four-foot lengths of thick plank NOT FASTENED DOWN laying flat side down in angle iron.  When we approached from the south end, I saw a few scooters just exiting.  There was maybe 8 inches of space on either side of the handle bars.  But, up we went (the entry was higher than the crowded market stalls at the entry side and so we ramped up onto the rickety bridge).  Once up, there was nothing for it except to make a quick ‘scoot’ across since other scooters, bikes and lowly pedestrians were awaiting our crossing before they could go.

As we passed them, more than a few were surprised to see it was two farangs riding two-up on the bridge.

Not much room for error. 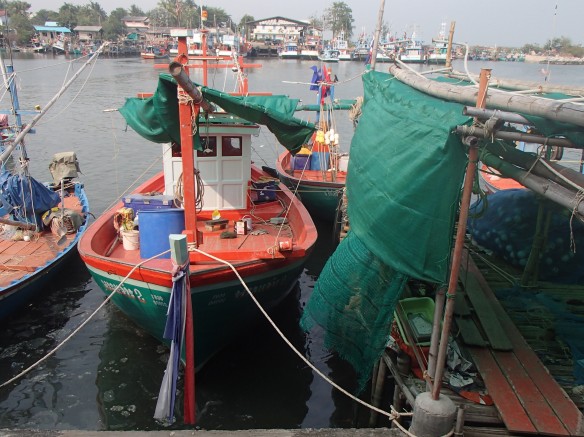 Anyway, we got to the other side and took some harbour shots.  Cool boats.  Very beamy.  Wood.  Old.  Still working. Some of the machinery we saw on the boats and on the shore was pretty old.  30’s and 40’s era.  Almost like Easthopes for those of you inclined to the salt. 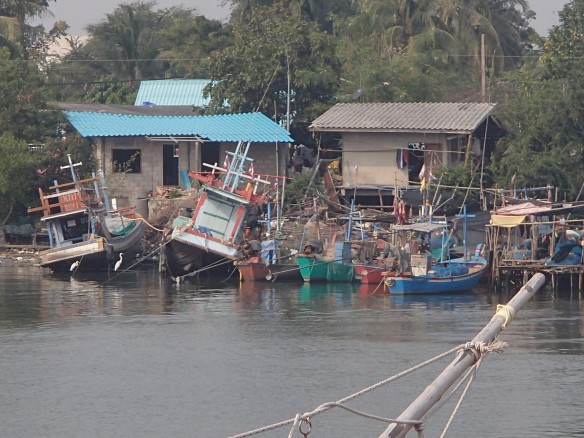 In one picture there are several lines leading from the rocky shore to the bow of the boat.  Sal is sure that is how the crew boards and disembarks.  She was so sure that she was going to ‘prove it to me’ by walking out on the single thick rope relying on the higher thinner rope for balance. “If you attempt that nonsense, at least wear your scooter helmet because you are sure to pitch onto the rocks below.” 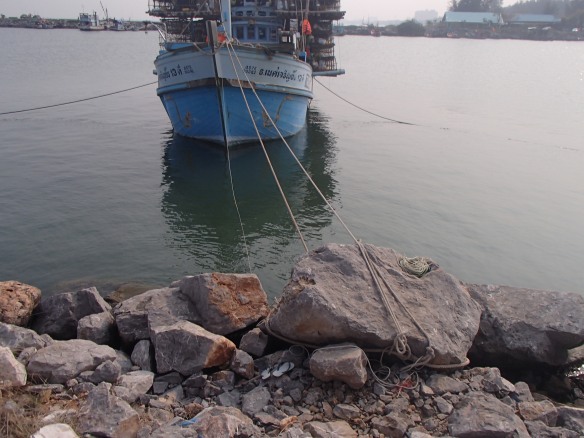 I refused to answer.

She took that as a sign.  Once again valour fell to discretion.  We rode away intact.

4 thoughts on “Rewheeled and fancy free”